tl;dr: The French railway company is on strike. Read the whole article for detailed information.

It is spring or as the french call it: “strike season”

If you live outside of France, you might be wondering:

Please keep in mind that the situation may change over time and that the information is to the best of our knowledge today (27. April 2018).

The French railway company SNCF is on strike. And because caufeurs love time tables they made one for their current three-month strike: 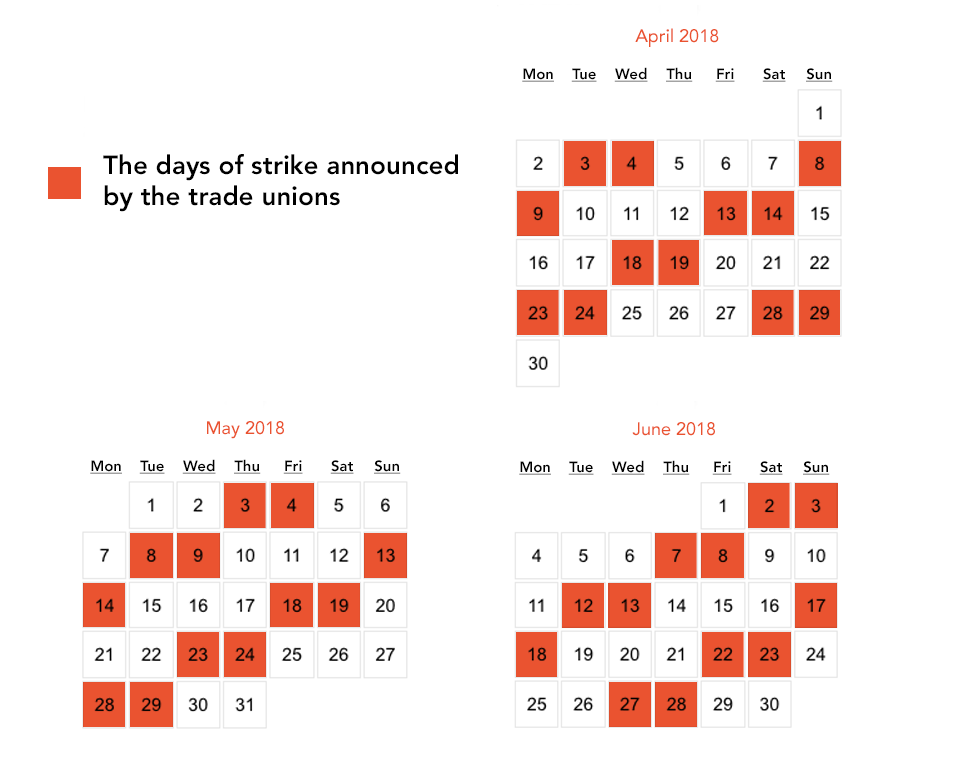 In the plan are blocks of 2 days where you should not expect any train to run. Currently about 40% of TGV run during a strike day, however it is nearly impossible to say which routes they will serve and the chance of making a whole connection reduces with every hop you have to take. E.g. to catch two connecting trains your chanches are 40% * 40% = 16%. Check the detailed information to know if your train is running.

However, SNCF isn’t only running TGVs but also regional trains, and those are the ones you’ll certainly have to deal with (also called RER in Paris). For example, if you land in the Charles-de-Gaulle airport, you’ll have to take the RER B line, which is affected by this strike just the same.

Luckily there are three days between the strike blocks where you can expect the trains to run unless:

What else is there to know?

Can I ask for a refund?

That depends on who sold you the ticket and how. Check with the seller.

What methods of transport are affected/available?

Only SNCF services are affected. Subways, buses and tramways inside of Paris aren’t affected. Cabs are an option, too.

How to avoid stress

Bring an (offline) dictionary, talk to people and learn some french. Also a big plus of traveling by train is that you are allowed to carry liquids like a bottle of wine or two that you can eat with some bread and cheese! If you need help reach out to the organizers and we try to help as best as we can. We will provide detailed contact info closer to the conference. For now you can reach us via email: team@rustfest.eu or on twitter: @rustfest.

Again, it is not run by SNCF so you have nothing to worry about there. Also, it is almost never on strike. So even during the strike days of others the metro will run (again, it includes buses, subways and tramways).

The planes strike too? No, actually it is the staff working inside the airport control towers. At the moment we don’t expect an impact for flights around the conference dates.